It is often full of obstacles to deal with digital character illustration. It takes a lot of creative thinking for you to create your characters from scratch. You will need a lot of effort and skill to make them so effective.

Here are 8 important things you need to keep in mind.

In general, we are interested in character stories and personality traits, which allow us to become invested in the characters more quickly. Arguably, even the simplest of stories can make a character memorable. So before we want to create a digital character illustration, we need to conceive the background of the character’s story.

Some people think that if I use a lot of lines and shapes I can design good character designs. But in fact, many impressive digital character illustrations are made up of simple shapes that are used very effectively.

Choosing the right shapes is very important for character creation. If you want to create a cute and gentle character, but it uses a lot of jagged thick lines and shapes, that might not be popular with people.

If you’re designing a realistic digital character illustration, you’re better off focusing on the real proportions of the character rather than deliberate stylization.

Of course, it can be really helpful to use outrageous proportions or exaggerate the length and size of body parts, even smaller details such as fingers, to shape the character’s personality if they are not as rigorous. You can make them look stronger clumsier or even more evil by exaggerating their exterior features.

It is often said that the eyes are the windows to the soul. When we look at a character, we tend to look at its eyes. The eyes of real-life people and animals are full of expression and are a great way to get a sense of what someone is thinking or feeling.

Another great technique is to exaggerate an expression to make it realistic and get pleasure from the character’s feelings without making the audience work hard.

The way you consider how a character stands or how it holds itself is another way to communicate more about its personality and to help you tell your story.

You can add some background and introduce other objects. Trees, houses or tables and plants, for example, can help us understand the importance of the character to these elements that we are familiar with.

Using color can help set a character’s mood; it can make them look more serious or more interesting.

Working with the right shades for skin tones, fur, clothes, etc. also helps the audience understand what kind of character they are watching.

Shading can be as complex or as simple as you like. It depends on how realistic or detailed you want your character to look.

When you consider shading, you can play with the style and final visual effect of your character. Using some sort of shading will usually make your work look more polished and professional in certain away. Take a good look at how other illustrators are doing it and try some different techniques.

This tutorial gives a good overview of how to handle an illustration from start to finish. It will take you from designing the outline of the character to polishing and fine-tuning the finished illustration.

In addition to outlining the process of my approach to character design and illustration, this tutorial covers as much information as possible about materials, lighting, and rendering, as it takes you through the different stages of illustration. Here is a showcase of some students who have taken this master class, you can check it out. Student Assignments Progress on Character Illustration: The Millennium War – Deity of Destruction

After reading the above, if you have realized your shortcomings and are no longer satisfied with your level and want to improve your digital character illustration, you can come to Wingfox, where there are quite a lot of wonderful tutorials to satisfy your desire to learn.

Level up your drawing skills in 6 exercises 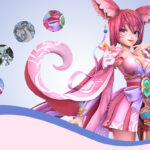 How to protect digital art